Lake Tahoe and Reno: A Mountain Range Runs Through It

In the crook of California's elbow lies a playland of great natural beauty, world-class ski slopes, Vegas-style entertainment, and plenty of gold-rush history. Straddling the northern Sierras where California and Nevada meet is the region's crown jewel: Lake Tahoe, the nation's highest alpine lake of its size and its second deepest (after Oregon's Crater Lake). With a shoreline measuring 72 miles long, this brilliant cobalt lake draws sun-worshippers to its many beaches during summer; come November, ski aficionados gather into groups and flock to the slopes of more than a dozen ski resorts in the area. And it's not just deep powder and groomed runs that make this region a wintertime paradise: wide-open valleys are crossed with trails for cross-country skiing, snowshoeing, snowmobiling, dog-sledding, sleigh rides, and backcountry telemark skiing. After the spring snow melt, all this open wilderness turns into prime hiking, mountain-biking, and horseback-riding terrain. 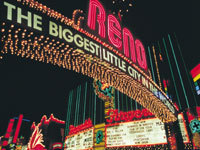 On the eastern side of the Sierras lies an entertainment capital of a different color: neon-bright Reno. Las Vegas' laid-back cousin, Reno offers casino gaming and revues in a high-desert community that has thrived since long before the first roulette wheel was rolled into town. Once known as the nation's divorce capital, Reno and its environs now are a hot destination for weddings, whether in a 24-hour chapel or on the shores of nearby Tahoe. Both industry and an arts scene are burgeoning, and visitors are increasingly discovering Reno as a year-round destination for nocturnal exploits and daytime adventure. Connected by both interstate and scenic byway, Reno and Lake Tahoe beckon to groups seeking the best of both worlds.

Nature gets top billing in this scenic segment of the Sierra Nevadas, yet not every attraction warrants strapping on ski or hiking boots. Make time on the itinerary for a trip to Carson City, Nevada's capital, for a trek down the landmark-lined Kit Carson Trail, or head to Virginia City, a one-time boom town that's home to Chollar Mine, the only remaining Comstock Lode silver-mining operation open for touring. Closer in, casinos share Reno's streets with numerous national historic landmarks, many of which can be viewed on a Historic Reno Preservation Society walking tour. High above the city, Lake Tahoe's shores are graced with architectural gems such as Tallac Historic Site, a set of opulent summer houses from the gold-rush era; the 1936 meld-into-the-landscape Thunderbird Lodge, now a popular place for weddings; and the 1929 Vikingsholm, a Scandinavian castle at the head of Emerald Bay. In nearby Truckee, the Donner Party saga is told at Donner Memorial State Park's Emigrant Trail Museum.

More contemporary attractions appeal to fun-lovers of any age, including Reno's Wilbur D. May Museum and Arboretum, a parkland complex with exhibitions, nature walks, and the Great Basin Adventure amusement park; and Fleischmann Planetarium and Science Center, with star shows and weekly telescope viewing. More than 200 cars from vintage to experimental comprise the National Automobile Museum, while nearly that many animals — including a rare liger — reside at Sierra Safari Zoo. In Tahoe, admire Emerald Bay's aquamarine waters from the deck of the MS Dixie II, a restored paddlewheeler departing from Zephyr Cove. In winter, the Tahoe Queen paddlewheeler doubles as a water-borne ski shuttle by taking skiers to and from the North Shore.

With the snow pack averaging 40 feet a year, schussing down area slopes is an obvious main draw. No less than 15 resorts give skiers and snowboarders their choice of chutes and half-pipes, and a dozen or so snow parks offer groomed cross-country trails or tubing runs (many with rentals and rope tows). Resorts such as Squaw Valley and Heavenly challenge hard-core skiers with natural jumps and double-diamond runs, while Northstar-at-Tahoe and Tahoe Donner have plenty of beginner terrain to suit the family or easygoing gathering of friends.

Non-skiers in the group needn't worry about finding outdoor action. Trails that lure hikers in summer become tracks for snowshoers come winter. Many of the resorts offer frosty fun: dog-sledding at Kirkwood, ice-skating at Squaw's Olympic Ice Pavilion, and sleigh rides at both. At Spooner Lake Cross Country Ski Area, small groups can rent a wilderness cabin for a cozy night in-and out-of the elements.

In summer and fall, hikers head to the mountains for trails that lead to alpine meadows and panoramic views. Many start from the region's numerous state parks, from the lengthy Lost Lake Trail at Sugar Pine Point to the easy Balancing Rock Nature Trail at D.L. Bliss. For pure mountain's majesty, hike a piece of the 165-mile Tahoe Rim Trail from one of 12 trailheads; mountain bikers tackle the Flume Trail for sweeping vistas from an 8,000-foot-high single track. Tahoe's beaches draw water-sports fans for kayaking, water-skiing, wakeboarding, and more; Reno's Truckee River Whitewater Park at Wingfield keeps kayakers close to the casinos. Outdoorsy groups can also fly-fish or raft the Truckee River, ride horseback through the backcountry, golf one of 40 regional courses, or go aloft in a hot-air balloon.

Throw a coin into the heart of Reno and you'll hit a casino offering gaming and top-notch entertainment. Among the hottest venues are the ever-popular El Dorado, with big-name performers in the showroom, rock and blues bands in the Brew Brothers pub, and sexy dance environs at BuBinga Lounge. Others on the hit list: The Garage at the Reno Hilton, featuring dual bars and a cigar lounge, and the Peppermill Fireside, its plasma screens, free appetizers, and firepit a hipster's draw. In Tahoe, Harrah's Altitude Nightclub hums with showgirls, wild lighting, and an oxygen bar; the Improv at Harvey's Lake Tahoe dishes up yuks from up-and-comers and stage vets, and Breeze at the Tahoe Biltmore brings an eclectic lineup to its stage.

For more sedate diversions, start by strolling the Riverwalk in Reno's Truckee River Arts District, an area of galleries, theaters, open-air concert venues, the 1910 McKinley Arts and Culture Center, and a third Saturday Wine Walk. Artworks that interpret the land and changing environment make the Nevada Museum of Art a must-see. The University of Nevada, Reno campus hosts concerts by the Reno Chamber Orchestra and the UNR Performing Arts Series; the Pioneer Center for the Performing Arts is home to the Reno Philharmonic (who also play a Summer Pops Series at outdoor venues), the Nevada Opera, the Broadway Comes to Reno series, and the surreal Magic Underground illusion show.

Arts are a mostly seasonal event in Tahoe. Summer sees the start of the Lake Tahoe Shakespeare Festival at Sand Harbor State Park's lakeside amphitheatre, the Valhalla Arts and Music Festival at Tallac Historic Site, and the Lake Tahoe Music Festival, with most concerts held at Squaw Valley. Year-round cultural fare comes courtesy of the North Lake Tahoe Historical Society, whose three-museum complex traces the history of the Tahoe area and the indigenous Washoe people.

Hi Tim, Lake Tahoe is great for all ages, with tons of outdoor activities for energetic teens. I recommend swimming, kayaking, hiking, and biking (I've done all of these things and found them most enjoyable).

Here are a few water activities and horseback activities you can look through and book in advance. Simply search under destination California: South Lake Tahoe.