Lake Tahoe and Reno: A Mountain Range Runs Through It
Carnival of Travel: 2nd Edition

Mexican Riviera: Bliss on the Pacific

Beloved by beach buffs, honeymooners, surfers, and cruisers, the Mexican Riviera — that scenic stretch of coastal communities between Mazatlán and Acapulco — entices more and more travelers to its sun-drenched shores each year. 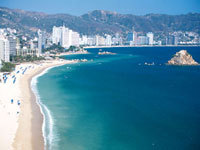 It's the West Coast's Caribbean — a hot, bright cure for the winter blues and blahs, where visitors can reliably expect temperatures in the 80s all year long. Mexico's Pacific Coast is also starting to rival Hawaii as a fashionable wedding destination, and couples wanting beachside betrothals can choose from a low-key village celebration in Zihuatanejo to a swank hotel gala in Puerto Vallarta.

This prime swath of real estate bordering the jungle-clad Sierra Madre range began booming in the 1970s, when the country's government began a push for tourism along the Pacific coastline. Acapulco started even earlier, attracting affluent jet-setters to its spanking-new hotels in the 1950s; however, Puerto Vallarta lays claim to catching the eye of the average tourist, who arrived in droves to the site where Elizabeth Taylor and Richard Burton made a film and a tempestuous home in the city's cobblestoned hills in 1963. In contrast, Mazatlán's popularity grew gradually as travelers discovered the beach appeal of this working seaport. Most representative of the tourism push are the sister towns of Zihuatanejo and Ixtapa. Only four miles apart, they couldn't be more different. Zihua maintains its fishing-village charm by government mandate: building codes are strict and therefore development is minimal. Ixtapa, on the other hand, was born fully fledged as a resort, and vacationers are beginning to flock to its high-rise hotels, trendy restaurants and bars, and the latest in water-sport thrills.

Today the Mexican Riviera sees thousands of cruisers arrive daily to its ports. But for groups vacationing sans big ship, the best way to visit is to fly in and rent a car or hire one of the plentiful taxis, many of which double as tour guides. Activities and excursions continue to burgeon as local entrepreneurs find new and novel ways to show off their region's charms. And then there's all that sand, sun, and sea.

Puerto Vallarta: The place to be in PV is on the malecón, a palm-lined beachside promenade punctuated by whimsical sculptures by various Mexican artists. From the walkway's southern end, cross over to the zócalo (town square); in sight is Our Lady of Guadalupe cathedral, whose gilded crown replicates that of Mexico's 19th-century Empress Carlotta. By leg power or taxi, climb the steep, narrow cobblestoned streets of the city for a glimpse of Casa Kimberley, once Liz Taylor's hideaway, and vistas of red-tiled roofs overlooking the bay. For kids, there's Splash Water Park for all things aquatic, from water rides to sea lion shows to dolphin swims. A short drive south leads to Playa Mismaloya, filming location for Night of the Iguana and now a popular site for weddings.

Mazatlán: Travelers into history should make Mexico's largest port their base camp, where they'll find nearly 500 architecturally significant buildings to admire, and most within the city center. Among them: the 19th-century Cathedral of the Immaculate Conception, with its twin yellow spires and baroque interior; the 1874 Teatro Ángela Peralta, a lavish Italianate theater still in use today; and the restored townhouses surrounding Plazuela Machado. Hire a taxi or stretch the legs on a walk out to Cerro del Vigía for far-reaching vistas and a view of El Faro Lighthouse, whose altitude is second only to Gibraltar. Mazatlán Aquarium treats the curious to a peek into Mexico's underwater world, with a sea lion show and tanks of sharks, eels, and other ocean denizens.

Ixtapa/Zihuatanejo: Laid-back Zihuatanejo offers few attractions, and that's the way residents and repeat visitors like it. Ideal for an intimate wedding group, Zihua offers sun, sand, and serenity on gentle beaches wrapped around a protected bay. Stroll Paseo del Pescador, a colorful bayside promenade with open-air restaurants and vendors; head away from the waterfront and experience a friendly town sans glitz and hype. A walk down Las Gatas Beach leads to El Faro Lighthouse and panoramic views. In contrast, Ixtapa is where the action is — mostly on the wide beaches and in the hopping nightclubs. Families can swim with dolphins at the Delfiniti Dolphinarium and enjoy the wave pools and water slides at Magic World aquatic park.

Puerto Vallarta: Forty miles of white-sand beaches serve as languid launching points for parasailing, banana boating, water skiing, jet skiing, and surfing. To the south is Los Arcos National Underwater Park, a prime spot for kayaking, snorkeling, and diving amid granite rock formations. The jungle's proximity to the city means that visitors can make like Tarzan by launching from a rope into a deep pool and zipping along cables set high above in the treetops at Canopy El Eden, setting for the film Predator. Great for groups are golf and mountain biking and hiking tours; in winter, whale-watching excursions sail in search of migrating humpbacks. Year-round, party cruises abound; more demure groups may opt for a sunset dinner cruise.

Mazatlán: Along with 10 miles of beaches offering the usual sand-and-surf sports, Mazatlán's waters are known for sportfishing and nature cruises — two activities perfect for groups. Glide through mangrove estuaries to spot herons, bitterns, and the elusive roseate spoonbill, or try a hand at reeling in marlin or sailfish (catch-and-release is the general rule). Take a kayak or a boat ride to snorkel the calm waters surrounding Isla de Venados, or join a horseback tour on Isla de la Piedras. Body surfing is big at Playa Olas Altas; Playa Bruja, north of the city, has the waves to host an annual surfing tournament. Hardy souls can take guided hiking trips into the nearby Sierra Madre mountains.

Puerto Vallarta: More than 30 galleries and civic buildings around the city showcase local and international works of art, many of which can be found on a stroll through El Centro, the heart of PV. History buffs will want to visit the Museo Arqueológico and Museo Río Cuale for their collections of pre-Columbian artifacts. Plays, dance, and open-air movies take place regularly at the Cuale Cultural Center, as do theatrical productions at the Santa Barbara Playhouse on Olas Altas. At the malecón's Los Arcos Amphitheater, mariachi and ranchero grupos perform regularly; come evening, it's a popular place for socializing and listening to local musicians.

Mazatlán: Arts lovers will want to time their visit to take in a performance at the ornate and historic Teatro Ángela Peralta; events include ballet, opera, concerts, and movies. Fiestas full of folkloric entertainment take place weekly at the Hotel Playa Mazatlán and El Cid Castilla Beach Hotel's La Pergola Theater. Shoppers seeking authentic wares should avoid the touristy jewelry and souvenir stores — far better are the covered Mercado Municipal and open-air shops of Old Mazatlán, particularly on Saturday nights, when Plazuela Machado becomes the weekly Artisans' Bazaar. The Museo de Arqueológia and Museo de Arta exhibit local artifacts and artworks, respectively; the latter can be purchased at the nearby Galería Nidart.

Ixtapa/Zihuatanejo: Neither fishing village nor resort community have yet to develop an arts scene; still, there are a few places not to miss. In Zihuatanejo, the Museo Arqueológico de la Costa Grande exhibits pottery and stone artifacts, maps, and murals dating from or illustrating the earliest peoples along this part of the Pacific. Behind Zihua's Paseo del Pescador lies the Mercado Turístico de Artesanías, an open market with more than a hundred vendors selling genuine crafts and goods. Bargaining is welcome. (A smaller artisans' market is on the main boulevard in Ixtapa.) Many of the hotels in Ixtapa host folkloric fiestas and dance performances.

This is really amazing. Thanks for the great info provided here, about the places to visit, the main attractions and ofcourse the best time to visit them.

I'm a sucker for history, so this is a great article. I've never thought of Mexico as destination with good archeological tours or historical tours, but I think I need to check it out!

Wow great information on where to go and events in Mexico. I like that you hit all the highlights, especially Mazatlan. Thanks for sharing