6 Ways to Green Wedding Travel
Fall is here. Enjoy it!

Visit to the High Arctic

You don't travel to the Canada's high Arctic without a good reason. Aboard the Akademik Iofe, a converted Cold War Soviet spy ship, my enthusiastic shipmates and I headed north from Resolute Bay into the Baffin Bay between Ellesmere Island and Greenland. Aboard are professional photographers, geologists, meteorologists, zoologists, professors, writers and just plain lovers of the polar regions. The majority had been to the Antarctic, a large land mass at the South Pole surrounded by water. The opposite north pole is quite different. Here at the top of the planet is ocean covered with sea-ice but surrounded by land.

I joined this band of brothers in order to tweak my latest novel, No Land too Desolate, a geo-political thriller set in this semi-frozen region, populated by Inuit in scattered in distant villages. These hardy people once derisively referred to as Eskimos still maintain their traditional hunting-fishing cultures, surviving in bitter sub-zero cold without sunlight for four full months of the year. The best and only time for those of us from warmer climates to visit is during the summer when the days are long and the sun never dips below the horizon. Don't dream about the legendary northern skies. There's no darkness to view these heavenly bodies.

In the course of our short trip, it's hard to observe the effects of global warming, though experts who keep annual statistics are unanimous in their evaluation. Each winter the sea ice is thinner and each summer a great deal less survives exposure to sunlight when cold once again heralds the coming of winter.

We travel to shore twice a day to explore the tundra aboard Zodiacs. Near glaciers one can witness calving as tons of ageless compacted snow and ice tumble into the sea. This material is 100 million years old. As this ancient ice floats beside my Zodiac I snatch a hunk to nibble in my mouth, without doubt the purest water I have ever tasted. Small air bubbles trapped in this ice have survived from earliest geological time. In my mouth I sample oxygen and nitrogen older than the air breathed by Abraham 1600 BCE or by an ancient Pharoah, 2500 BCE! 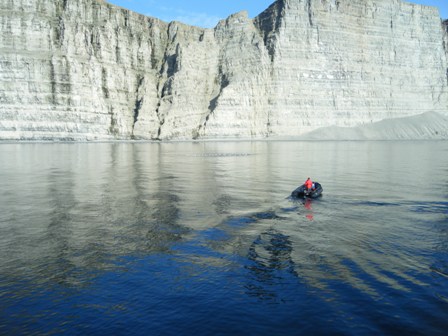 My fellow explorers and I feel privileged to be here, realizing how we live only on the skin of this vast planet. Mother Earth doesn't belong to us. We are only visitors who like the native polar bear and walrus come and go, leaving this eternal legacy to future generations.

Roger Herst is the author of several novels, short stories and scholarly articles. He is an ordained Rabbi with a doctorate in Middle Eastern History, holding undergraduate and graduate degrees from the University of California Berkeley, the University of Chicago, Johns Hopkins and the Hebrew Union College. He is an avid tennis player and musician. There’s nothing outdoors he doesn’t love.

It is my dream to visit the Antarctic at least one in my life time...